I know that people are trying to be helpful but it really isn’t when they send articles to me about how unsafe La Paz is for a solo female traveler…days before I head to this place…by myself. 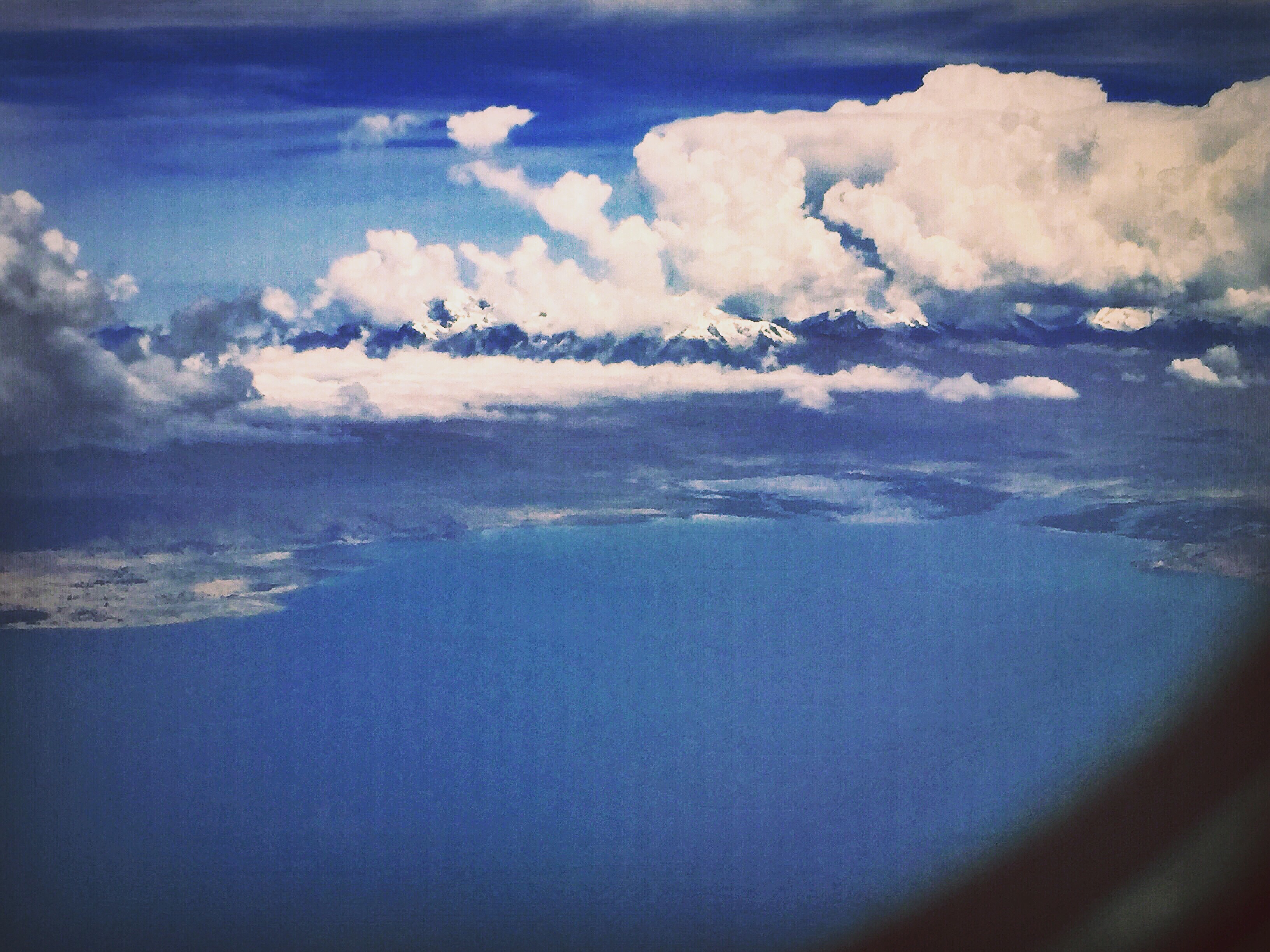 Well at least the plane ride is beautiful coming in but I am definitely feeling uneasy.  I wish that it could be attributed to the elevation (11,975 feet ~ 3,650 M) but I think all those articles have really gotten to me.  And my day is about to get worse as I somehow forgot about the visitor visa that I am required to have as an American (so atypical for me)!  Good news is that I am able to get one upon entry at the airport but the bad news is that the $160.00 (USD) has to be paid in cash and there are no functioning ATMs.  I hadn’t planned on using so much cash in Ecuador but I luckily had enough left over…in various hiding spots so I have to take apart my luggage to get the money.  I think the airport agents just feel bad for me at this point and advise me against taking a cab for the expense and because I am solo and tell me how easy it is to take a minibus into the city.

I am glad they had given me that advice because so many of the horror stories centered around illegal taxis.  It is always a good idea to learn what an official cab looks like in any city that you are in but I am very paranoid about it now and none of the cabs at the airport are legal.  I realize I am not sure what stop I am supposed to get off and end up asking a really nice lady who helps me out and even offers to walk with me.  I decline her offer but am warned by her about the dangers of La Paz for me being solo.  And then I find out my buddy I am supposed to be doing the Death Road with won’t be coming to La Paz until the end of the week (and I’ll be on my Uyuni tour then). Well I decide to explore the city…on foot (not unusual but I do find the men including the cab drivers to be quite aggressive and creepy) and I end up getting lost (another unusual thing for me!) I realize I really am getting dumb here but end up finding my way eventually to TL & BL: La Paz’s transit system (Mi Teleférico).  It uses cable cars as the primary mode of transportation and has been operational since May 2014 (additional lines are still being built) – Cemetery as seen from one of the lines TR & MR: The views from a ride up and down respectively BR: At one station, I stumbled across a ‘hip hop in the barrio’ and graffiti fest Other sights: TL: The witches’ market with dried baby llamas/alpacas for sale TR: Plastic Little Tikes cars set up as a kiddie ride BL: Performers in traditional Aymara dress in front of San Francisco Church BM: Cool stairs in Plaza San Francisco BR: Sunday market in El Alto where you can find/buy any and everything (recommended to not bring anything valuable here so I only took quick snaps on my phone) 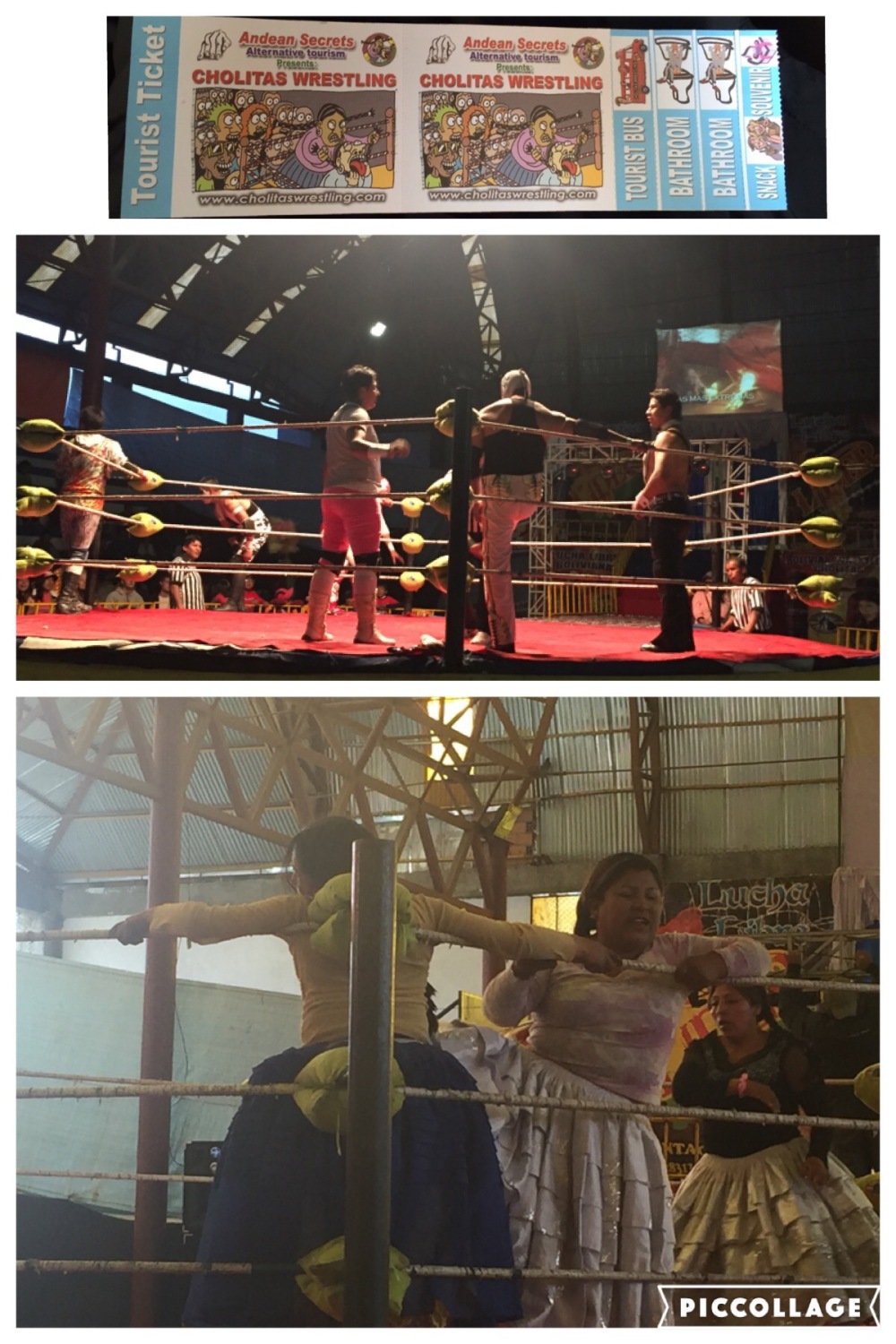 Cholitas and Lucha libre wrestling: It was definitely an experience – with both the tourist and home crowds getting really involved into the event.  It was a bit ridiculous but isn’t that the point?!

Ok I realize that I don’t want to stay longer in La Paz and won’t have enough time to go to Sucre and Potosi.  But as I will have enough time to take the 4 hour bus ride up to Lake Titicaca and spend some time in Copacabana so I book my tickets and head out. I definitely made the right decision to come here T: The view from my 50 bolivianos (or $7.25 USD) hotel room BL & BR: I ended up spending more on dinner than a place to stay (65 bolivianos) but the view and the pie was worth it!  So glad I took the waiter’s suggestion and wish I would have remembered earlier that limon can be either lime or lemon because how many delicious lime pies did I miss out on?! Ok I have really become stupid in Bolivia and have a misunderstanding about when the boats leave for Isla del Sol in the morning so I decide to explore around town and find some BL: cool and BR: romantic graffiti.  I decide the elevation of 12,602 ft (3,841 m) is not enough and hike up to see some Incan ruins (TL) and am rewarded with spectacular views (TR/ML/MR: Overlooking Copacabana & Lake Titicaca) and also go to visit the Basilica.   As I am debating if I want to go to the isla for only a few hours, I strike up a conversation with a Brit and decide to stay and continue exploring the town. We end up stumbling across this (TL) super cute Eco-lodge/cafe and (TR) spending the afternoon relaxing in hammocks.  The walk along the shore of the lake is beautiful (ML/MR) and end up just talking the day away.  He had been told about a place that serves (BL) trout sushi and try it out for dinner – it wasn’t too shabby. But definitely not as delicious as the freshly caught trout that we would have for lunch the next day before I have to leave. 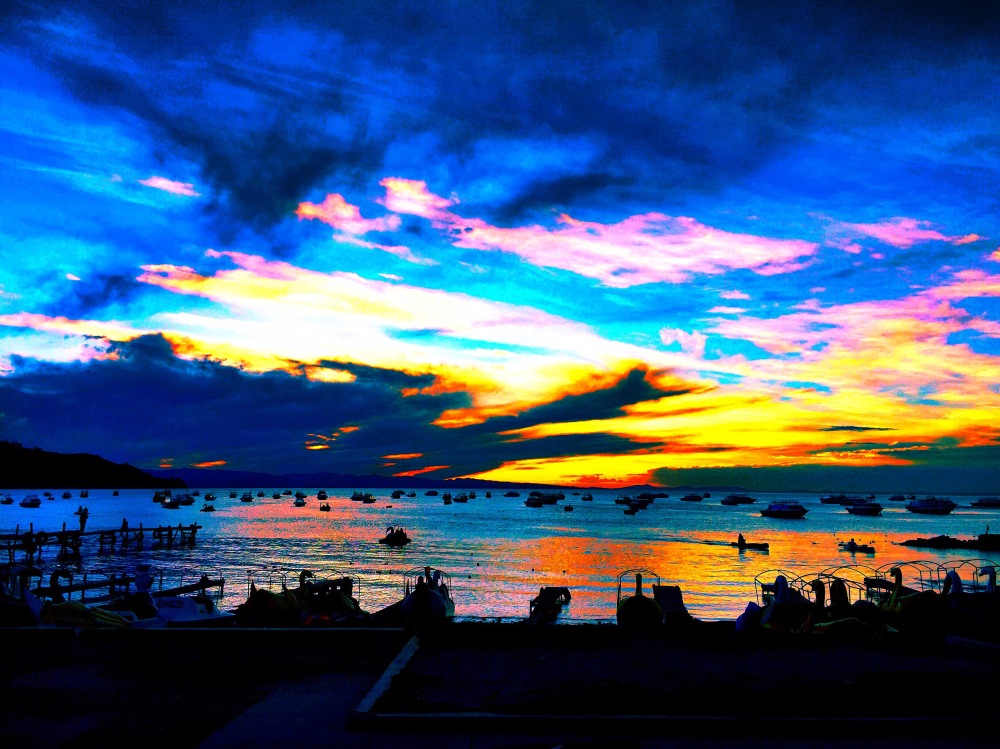 I hadn’t planned on going to Lake Titicaca because I had heard from so many friends that they hadn’t liked…but I really enjoyed my time in Copacabana and the sunsets there were insane (photo above). 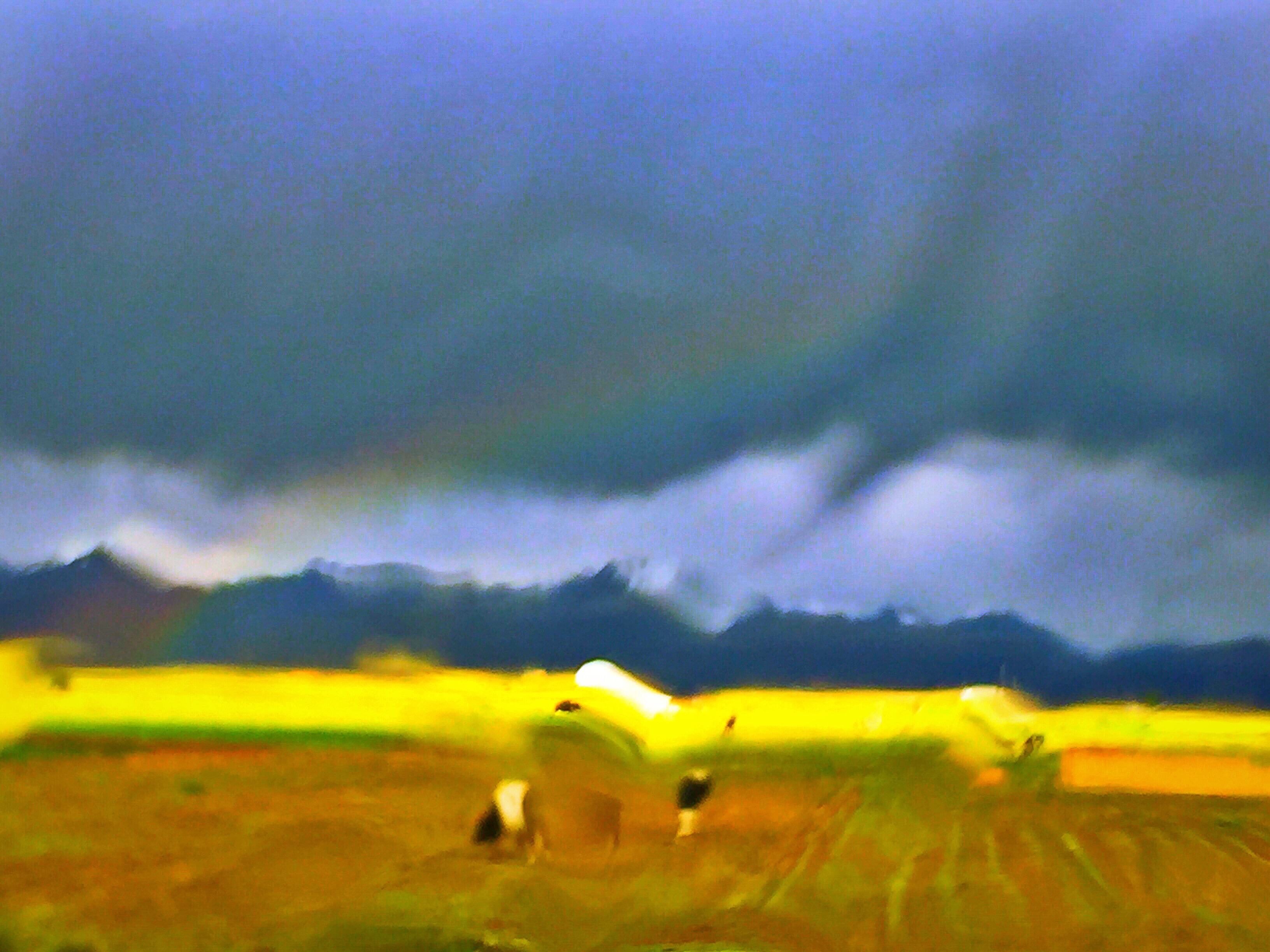 My bus is scheduled to leave at 1 with an arrival in La Paz at 5.  I will then catch my overnight bus to Uyuni at 9 but the weather/road closures and construction issues first cause a delay in departure then push the journey to 6+ hours…but (photo above) the universe reminds me that after rain, the sun will come out again and if you look, there are often rainbows…and I make it into the city at 8:18 pm.

So I am worried that perhaps with La Paz that it was the reverse type of “manifest destiny” or a self fulfilling prophecy but I know that I didn’t look at only the negatives there.  Sometime even an optimist may not like a place and it’s not necessarily a reflection on that person and place ~ La Paz just wasn’t for me.  I guess it’s like the fact that I won’t get along with every single person I meet.  Travel isn’t just about the beautiful things but also can make (I would argue should make) you uncomfortable and even stupid at moments but those are the opportunities to grow, to change, to be enlightened.  I think that humans are not static but constantly evolving creatures looking to improve ourselves.  Oh there’s that optimistic spirit again!  And good, right in time for what I came to Bolivia for…Uyuni!