So we are now on the hunt…for last of the Big Five.

So the term “Big Five” refers to the five most difficult animals for big game hunters to hunt on foot. The animals are African elephant, African lion, Cape buffalo, African leopard, and white/black rhinoceros. We have seen four out of five, but the last one – the rhino is also the most elusive and the pursuit may prove to be futile. {On a side note, I am not against hunting for sport (in most instances) or for meat. Also, I eat meat so really I have no room to say that I am opposed to killing animals. I guess it’s the notion of trophy hunting with high powered guns with only the most superficial definition of “hunting” involved that angers me…but that is another post for another day.}  The only shooting we will be doing is with our cameras.

And where are we heading? To the Ngorongoro Crater/Conservation Area at the edge of Serengiti National Park.  The Ngorongoro Crater is a caldera: essentially when a volcano erupts and collapses on itself. In this case, it was a very large volcano with estimates ranging from 14,763 ~ 19,028 ft (4,500-5,800 m) ~ (Kilimanjaro is 19,341 ft (5,895 m) for some perspective).  And the crater is so large that the east highlands receive 21-47 inches of rain a year and is covered by montane forest while the west wall recieves only 16-24 inches of rain annualy and is grassland/bushland while the crater floor is mostly grassland but does contain two wooded areas.

And where are we staying? At the Ngorongoro Sopa Lodge that is located at the highest point on Ngorongoro crater’s rim and had amazing views across the caldera.  Also has a west facing pool that provided the perfect reflection for the beautiful sunsets that we witnessed…speaking of the pool, I had such a funny/#firstworldproblem interaction there.  I went to check the water temp and was telling the group that “the water was cold” (in Swahili) and a worker overheard me and responded with “yes, the water is very, very cold” (in Swahili) and then proceeds to tell me in English “Ma’am you are in Africa, the water is always cold”.   Okay – now I know.

And what did we see?

Lions (Simba) We were able to get so surprisingly close to the wildlife! Lioness napping less than five feet from our Landcruiser. Top right photo shows the spot that two lion cubs found to shelter from the hot noonday sun – the underside of another Landcruiser! They got quite comfortable and slept quite peacefully and the lionesses did not seem to mind as they never approached during the 30 minutes (maybe even more) that we were there! 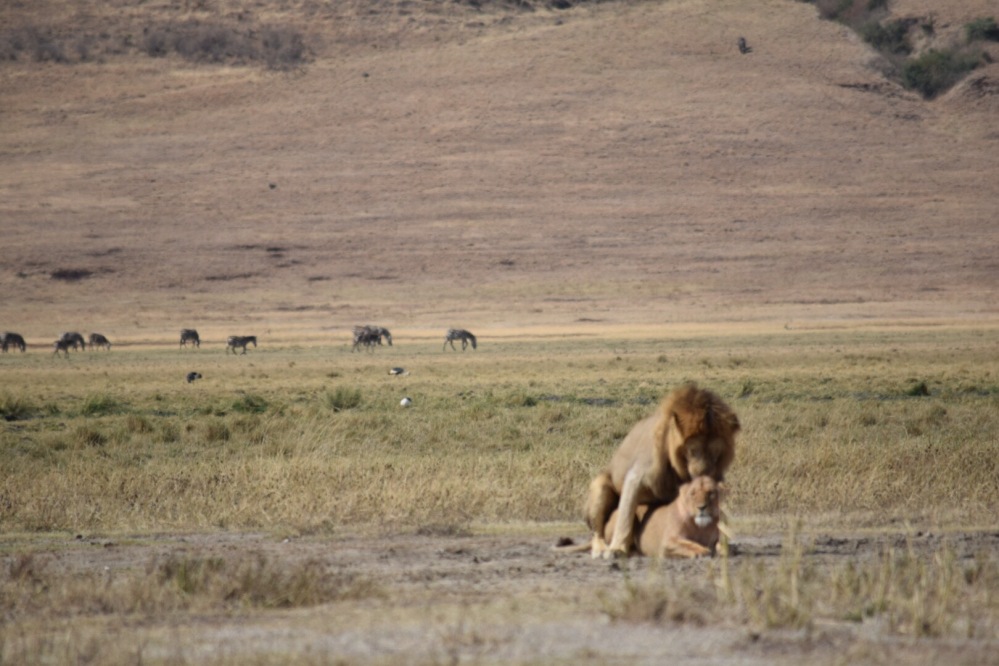 And apparently for the ostriches (Mbuni) as well. The male is too far away to clearly see in this picture but his neck and legs are quite red to attract the female’s attention. But best of all? He does a funky little dance to really attract her (got to witness it live) and reminds me a bit of nightclubs…

And some of my favorite wildlife photos: 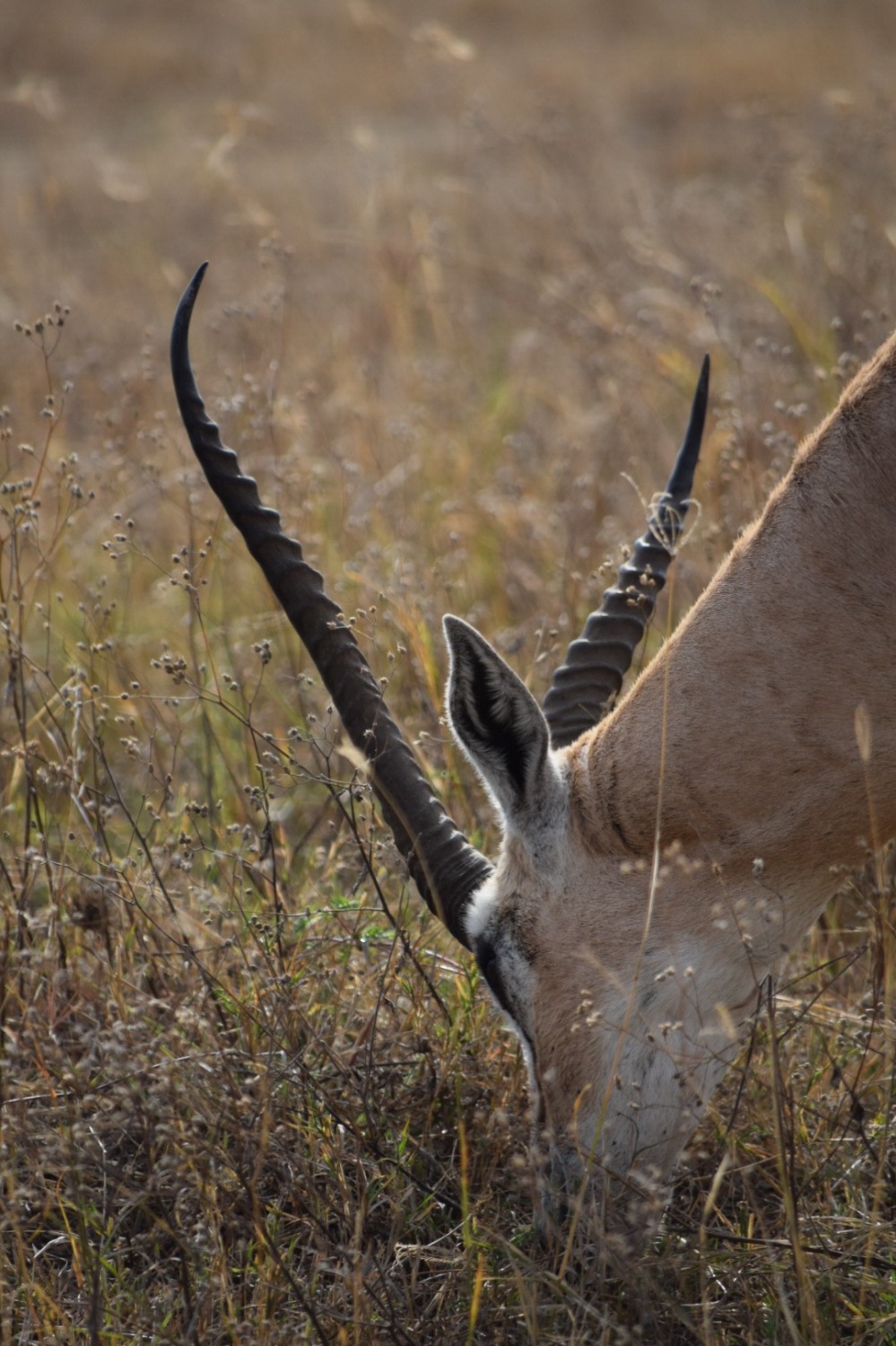 And the picture of the hippos (Kiboko) was taken from the best place you should view them – the safety of the Landcruiser. Hippos are quite agressive (can you see the scars from fighting on their backs? and surprisingly fast…and are the animals responsible for the most human deaths in Africa. 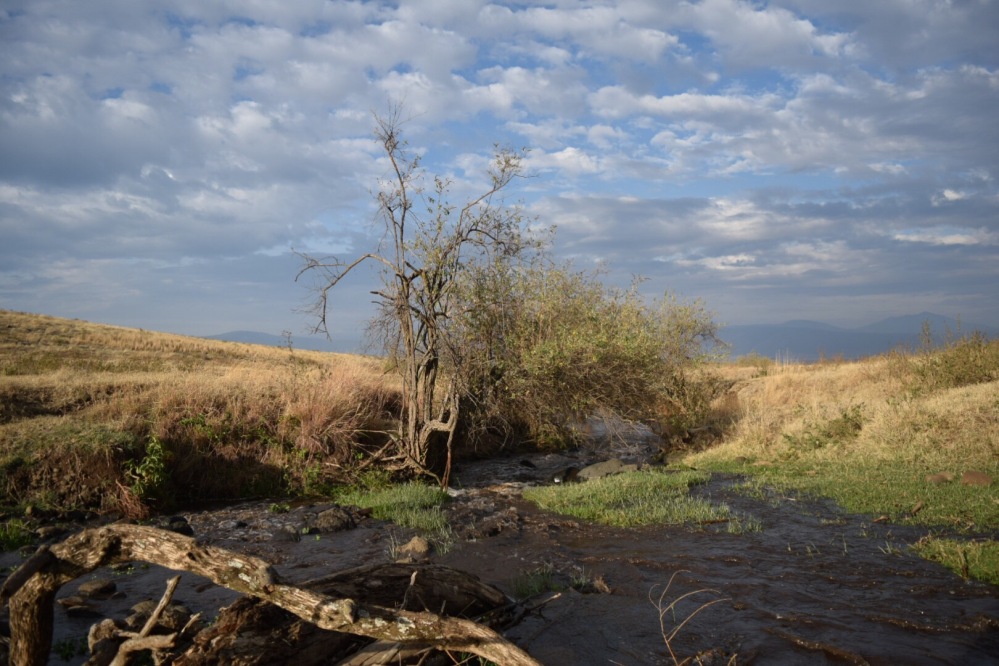 Oh and I haven’t talked about the journey…here you can see why Landcruisers are so popular as safari vehicles – they can go anywhere, like we did through the river! And you can pop the top – it was so fun and exhilarating to have the Landcruiser speeding through the park and standing up – feeling the wind rushing through your hair. That would never fly in the States since no one was buckled in but I definitely saw the allure dogs have for hanging their heads out of windows!  There is such a sense of freedom and calm that pierces our rides but also some adventure especially while we are on a quest for a rhino… 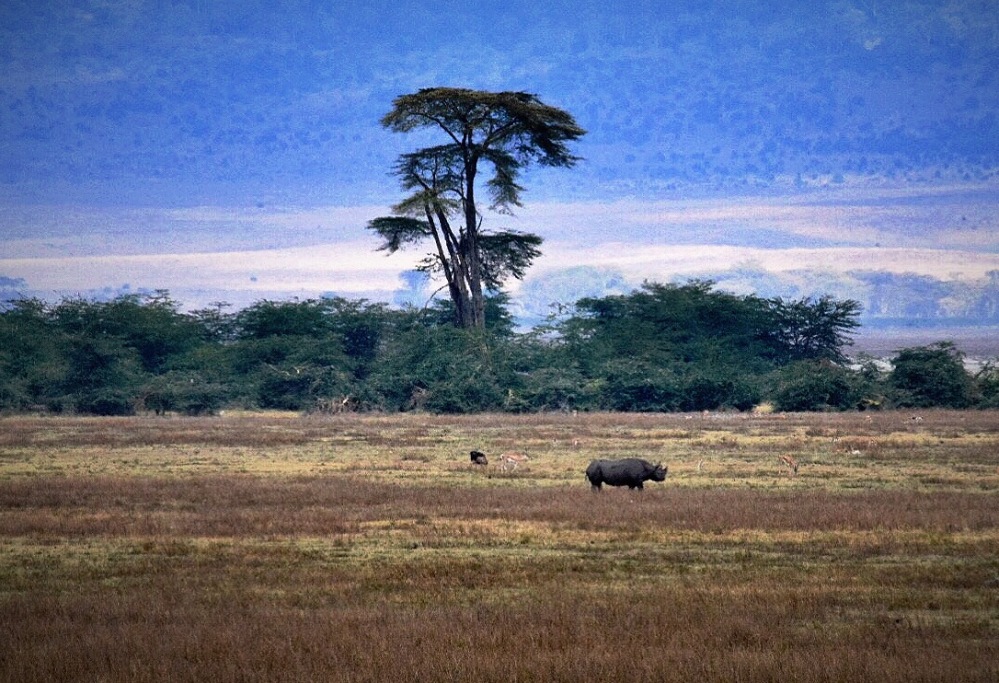 It’s the last day and we are going to head back to the lodge…I am beginning to feel a bit of disappointment that we will not be seeing the rhino. But then over the radio, Charles gets word that we should head over to an area and there we see (from a great distance) ~ a Northern black rhino.
We have been searching high and low and finally there one stood far in the distance. This was another bittersweet moment for us ~ like the glaciers on Kili, they are disappearing at an alarming rate! Will we ever seen another black rhino in the wild? They are critically endangered with only 35 black rhinos left in Tanzania and with less than 5,000 left in the world band dying because humans want their horns ~ horns that are composed of keratin. Yup. They same substance that makes up our hair and fingernails…

And then it is time to leave and start the journey back home.

But before we head to the airport, Charles takes us to this lodge where we will have lunch. It is owned by someone who has their own menagerie including the only crocodile we saw on the trip and many porcupines. Weird looking animals for sure. The game keeper was this wonderful man who abruptly left while we were looking at the porcupines and came back with some greens for them. He also let me feed them! Pretty cool ~ Poa!


I had been talking about the trip for months (had to let my customers know why I would be out for two and a half weeks) and was worried that I had talked it up so much that it would be a letdown. How could it possibly live up to all these lofty expectations I now had developed? And the most amazing thing happened…the trip far exceeded them. Even with the AMS, the Kilimanjaro trek was as awe-inspiring as that IMAX movie had made it seem so long ago. Sure I wish that I would have been able to stay at the summit longer but even as it was, it was such a great experience. The safaris were so cool ~ you would get so close to these animals in their native habitat. And I was able to have the excitement and wonder of experiencing nature so up close and personal. And then there were the people of Tanzania ~ lovely, warm hearted friends that were made. To be able to share with them our joy and laughter, to learn about each other and our lives/homes/countries, to be taught, to be welcomed…it was simply wonderful. While we were only here a little over two weeks but the time spent in Tanzania will always stay with us. We came seeking adventure and were rewarded with once in a lifetime experiences and friendships…