So we have summited Mount Kilimanjaro but that is only part of the adventure that we seek in Tanzania: onto the safaris!

Well first we spend another night at the lovely Ilboru Safari Lodge (had stayed here before the Kili trek when we first arrived in Arusha).  We were not sure what to expect, especially when the drive is through a residential neighborhood on a extremely potholed dirt road that seems so far from the center of Arusha.  And then all of the sudden, you pull up to a gate and you see a large two story building that houses the reception area and restaurant and is not the hotel as you originally thought.  It turns out the property actually has these adorable little cottages (two rooms per cottage) where you will stay, set in a beautifully maintained, picturesque setting with lovely gardens and trees and walkways and there is even a large, though quite chilly, pool.  And we had lovely hospitality from the Dutch proprietor to the ground crew to the front desk clerks.  And ‘mmm’…even now the first thing that I think about when I think about this property is the delicious fresh squeezed passion fruit juice.  It is offered right when you arrive at the property and available at meals and I could not get enough of the stuff!  That’s one thing that took me by surprise, how much Cory and I were reminded of Hawai’i with the tropical landscape, lush vegetation, coffee plantations and of course, the passion fruit juice.  Mary and Gregg said that the area around Arusha reminded them of Costa Rica.

So naturally when planning this dream trip, we all thought okay it is obvious that we should do the Serengeti since that is what pops into one’s head when thinking about safaris in Tanzania/Kenya – right?  How could we travel all this way and not take that most iconic of safaris (at least in this part of Africa)?  Thank goodness, we listened to the advice from Carol (from Taraji Kilimanjaro who also set up this part of our trip) who said that since it was the dry season that we should instead consider Tarangire National Park.  The Tarangire River crosses through the National Park (approximately 1,100 square miles/2,859 square kilometers) and it attracts thousands of animals during the dry season.  After the Serengeti, Tarangire National Park boasts the greatest concentratin of wildlife.  I wasn’t sure what to expect, but I really cannot say I was prepared to see as many animals as we did and as often as we did…so glad that we had not opted for the long, dusty drives of a Serengeti safari (besides, of course, I plan to come back!)

Oh and the place that Carol ended up booking for us? FABULOUS!!  A Nomad Tanzania property called Kuro Tarangire that is set up near the bank of the Tarangire River.  As advertised, the camp is ideally placed to encounter wildlife moving through the park and since we were set up in one of the outer tents, we really were able to see and hear the wildlife right outside our tent!  It is a camp that is seasonal (taken down once the season is over) and created to create minimal impact on the environment so right up my alley!  I wasn’t crazy about the idea of camping after seven days on Kili, but a girl could get used to this…glamping at its finest.  Fresh French pressed coffee with juice and cookies delivered straight to your tent in the morning, hot water showers in your ensuite bathroom, a large and comfortable room and bed, delicious meals served in the large guest house with amazing company, and hot water bottles tucked into your bed when you turn in plus great laundry service!  Actually this is what I want my life to be like all the time…

The pursuit of wilderness: realized!  I wanted to see wildlife in the wild and I could not have asked for more…so many animals roamed right outside of the tent but this is my favorite moment at the campsite.  A bull elephant was about twenty yards from us, eating the bark on a tree when he turned around right as I was going to step outside with my camera.  Luckily, he was just checking things out not getting ready to charge ~ thinking to myself, this is when this set-up would be a major disadvantage hmmm it is a large room but still essentially it is a tent structure…will the bed and the bathroom be enough to stop him or would he be able to destroy this easily? ~ thank goodness those questions remain unanswered.

And the rest of the National Park and animals and our adventure:

Elephants (Swahili:tembo) near and far. Top right picture I affectionately call “like mother, like daughter” and the bottom photo may look familiar ~ remember the stained glass panel?

Birds (Ndege) ~ Audubon would be able to tell you more ~ only one I can tell you anything about is the middle left: Kori bustard it is the largest flying bird native to Africa.

Monkeys (Kima) ~ They are definitely not as cute, cuddly or passive as one may think as we, especially Gregg, quickly discovered at our al fresco lunch.  Though I am sure that it all started with some stupid tourist that thought it would be a good idea to feed them. Then after that, the monkeys decided that it would be easiest to get food (and wet wipes) from humans and are quite aggressive and attack in groups and from multiple directions!

Giraffes (Twiga) ~ one of the many cool things that we were able to witness was seeing a giraffe drink. Apparently giraffes are a bit skittish, okay a lot skittish, and many people never see them drink (as one woman staying at Nomad Kuro was lamenting to us). It was quite the process and as awkward as it appears.

Baobab tree ~ the large baobab trees in the park are thought to be over 1,000 years old! So the large hole on this particular baobab tree was apparently cut out and served as a hideout for poachers. So sad on so many levels… Wildebeest (Nyumbu) / Zebra (Punda milia) African plains besties (as Charles told us when we asked why they are always together, well he used the term best friends)

It really was amazing how much wildlife we were able to see. In fact, it became almost mundane “oh more zebras, oh wildebeest” but then Charles would spot something in the distance and we would set off and then be amazed by the next thing that we would see! 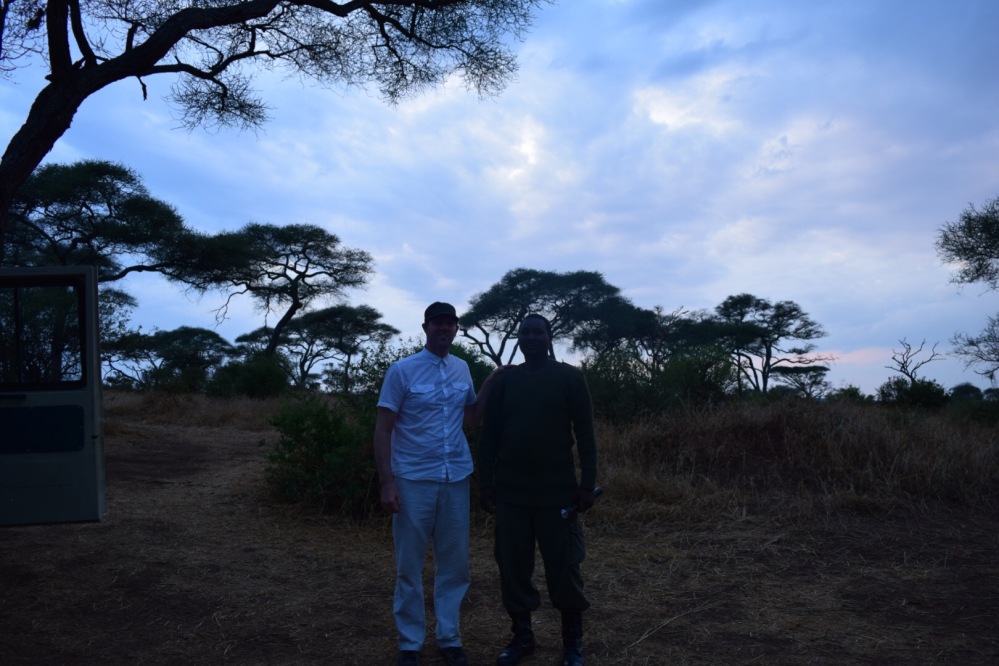 So the armed guard before our morning walking safari ~ It was a bit of a letdown since it had rained the previous night so all the wildlife was scattered around the park.  However, it was not with a bit of excitement…we had crossed over the river and came within striking distance of a mother elephant and her calf, so our head guide decided that it would be best for us to leave the area.  When we were walking down the embankment, this guard was trying to keep an eye on the mother and almost lost his balance.  I was imagining him falling and the gun going off and thinking that “Darn Kili didn’t kill me but this is how I go?”  ~ luckily nothing of that sort transpired… 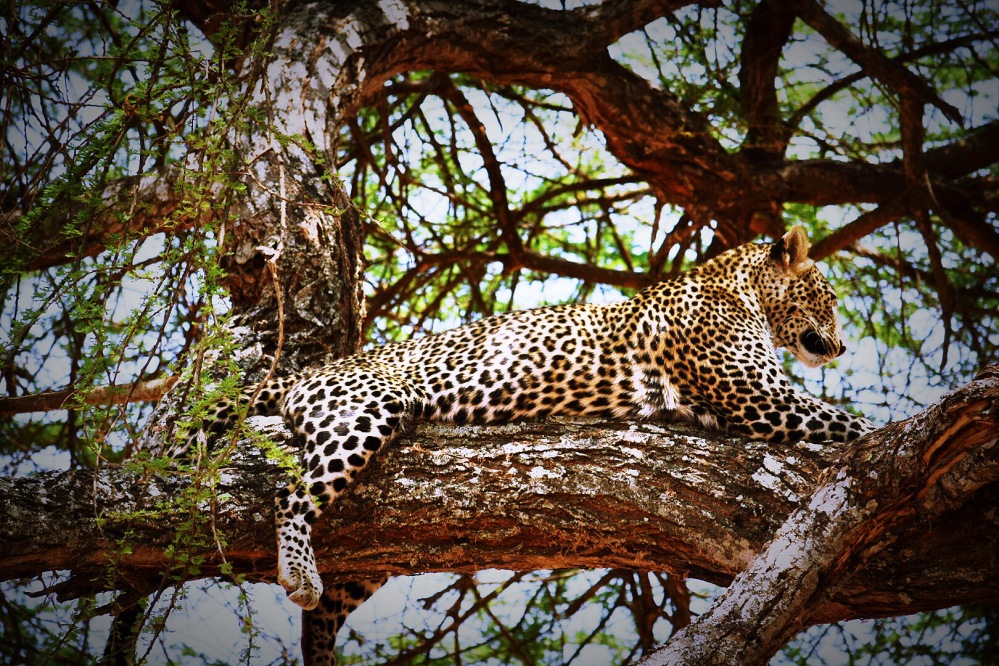 Leopard (Chui) And this was completely amazing! Definitely the highlight of Tarangire safari  and we were so close ~ right under the tree when this pic was snapped.